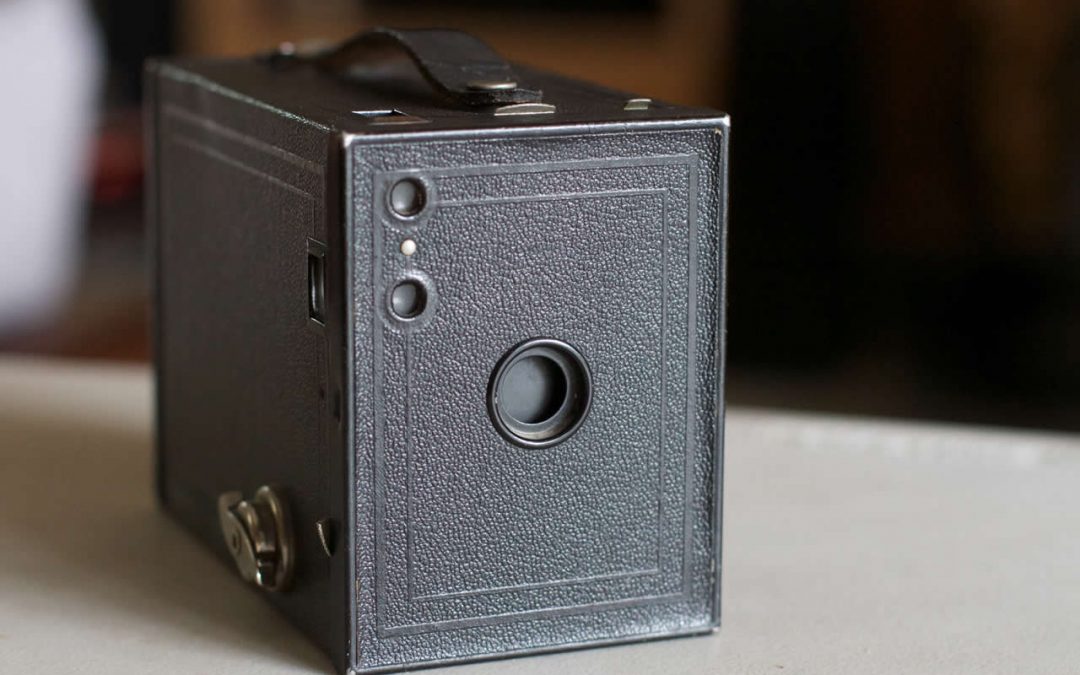 It goes without saying that cameras have come a long, long way since the Kodak ‘Brownie’ first burst onto the scene back in 1900. Today, of course, we no longer need to develop reams of camera film to get the super-sharp, high-res images we want. Nowadays, even modestly priced mobile phones can produce incredible results.

A camera in a cardboard box

Eastman Kodak’s ‘Box Brownie’ was revolutionary in its day and was at the cutting edge of photographic technology. For the first time, an everyday camera that was affordable and reliable could be purchased by the average consumer. It was initially priced at $1 (yep, a single dollar) which in today’s money probably equates to around £30 and because of this, it sold in its millions.

Its beauty was in its simplicity, with the outer box initially being made of cardboard. Inside, it contained a simple meniscus lens that took 2 1/4-inch square pictures on 117 roll film. Because of its small size, simple design, low price AND ease of use, Kodak were keen to market it to the younger generation to encourage them to take up photography as a hobby. For the same reasons, Box Brownies also became popular with soldiers, who took them with them to document what was happening during the war.

Who invented the Box Brownie?

The Box Brownie was the brainchild of Frank A. Brownell, who patented the design in 1900, with the Kodak Eastman Co. being listed as the ‘assignee’. Prior to this, the “Kodak Camera” was the only viable alternative sold by the company. Sold from 1888 onwards, it was around 25 times more expensive than the Brownie and you had to send off the whole camera to get the pictures developed!

How did the ‘Brownie’ get its name?

The name is thought to have come from the “Brownies” who were folklore spirits that appeared in Palmer Cox’s cartoons of the day. The name was mainly chosen because of the popularity of Palmer’s cartoons and also because the camera was made for Eastman by Frankie Brownell (hence the ‘Brown’ reference).

When did Kodak stop making the Box Brownie?

As you can imagine, the Box Brownie evolved considerably as the years progressed. The cardboard box was replaced with Bakelite and later Brownies even had a built-in flash. Nevertheless, as technology marched relentlessly on, cameras became smaller and the production lines for the Box Brownie finally ground to a halt. Incredibly, the very last official Brownie camera was made in Brazil in 1986 and was the ‘Brownie II.

If you’d like to find out more about the iconic Kodak Brownie, I recommend visiting Chuck Baker’s Brownie Camera website. It’s not the most modern-looking of sites but it’s been online since 1994 so contains a plethora of info and pics all dedicated to the little cardboard box with a lens!

Lead image of a Kodak Brownie No.2 Model F (1924) courtesy of cogdogblog via Wikimedia Commons – CC0